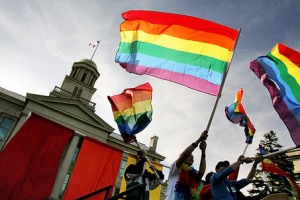 Run to the history books and write a new entry. No matter your perspective, when the President of the United States announced his support of marriage for two people of the same sex, we crossed into uncharted waters as a nation. While Bible believers cringe and face growing fear, others of a more socially liberal persuasion celebrate victory.

On the one hand, Christians speak in apocalyptic language on the issue. Can you blame us? You don’t have to agree with us, or believe every word of the Bible as we do, but it is fully disingenuous to say that the Bible doesn’t teach that homosexuality is sin before God. What other position could one hold while claiming to believe the Bible is fully the Word of God? So you can easily imagine what our conversations sound like.

On the other hand, my wife and I have occasion to know and care about people we’ve met primarily through the SCI world who would see it far differently. The latest statistics I’ve heard have this debate at around a 50-50 divide in our nation. I have two observations I’d like to make. Both have something to do with the waning influence of Christianity today. Of course, if the influence of Christianity wanes, it falls on Christians and not on Christ.

The most-used argument for homosexual marriage is something of the live-and-let-live variety. Don’t violate someone’s right to whatever he or she wants to do. Don’t violate someone’s right to privacy. Yes, everyone has a right to do morally right things, or even to do morally neutral things. It’s no one’s business either. But this argument doesn’t hold water otherwise. Would those who use this argument use it for spousal abuse or child abuse? Of course not! Why? Because they know it’s morally wrong. Somehow even if someone subscribes to moral relativism, they would never hold it in these categories. In so doing, they blow up the argument. It is a moral question, and though we may not agree on morality, on some level we all know there is something called morality and we live by it. Christians say morals must be defined by God as given in His Word. Christians seem to argue in the arena of ideas from a far weaker position than is necessary. Somehow spouting insults, which is the antithesis of Christianity, replaced a discussion of what decides right and wrong in a world where everyone somehow knows right and wrong exist.

That leads to my other observation. It is why the world so little listens to we Christians. In too many cases, we hate homosexuals. We don’t have a scriptural leg to stand on in so doing, yet we don’t seem to care. Perhaps we don’t go as far as the wacko Westboro Baptist bunch, who spout hatred of homosexuals with salivating glee and an element of perverted fascination, but we speak of them as if they were beyond the reach of God’s grace. I am aware of Romans 1:24-32 and its unequivocal condemnation of homosexuality, but I notice several other sins mentioned there as well. Why do we pick on the one sin at the exclusion of the others? It’s my right and yours to find this sin more personally repulsive, but does it carry a right to hate those who practice it? When was the last time you felt so strongly about, for example, “backbiters”? Or the “proud”?

It’s true as Christians that we should take our stand against the rising tide of public opinion and say homosexuality is wrong, wrong for our country, wrong for individuals. But it’s also time to love as Christ loves. I don’t know about you, but I don’t believe there’s any homosexual in the world who isn’t loved by the Lord as much as me, nor one whom the grace of God can’t reach. That’s the confidence I have in the cross of Christ, and as always, Jesus is the answer.

16 thoughts on “The Christian Looks At Gay Marriage”