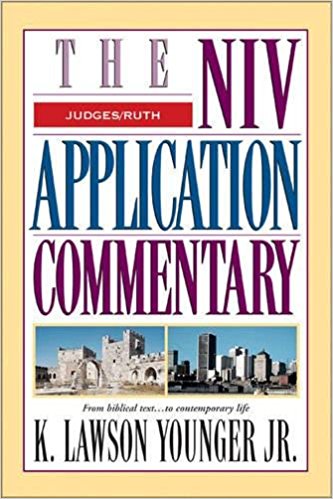 Lawson Younger, Jr., has turned out a fine volume on Judges and Ruth in the pastor-friendly NIVAC series. He did a fine job in pulling out the type of scholarly information that is most beneficial to pastors while also aiding pastors to connect with modern audiences when presenting the text.

In his Introduction to Judges, he begins with a brief discussion of the title of the book and role of the judges in Israel. Since the Book of Judges is anonymous, he spends little time on authorship other than stating that fact. In explaining the purpose of the book, he agrees with Daniel Block that it has to do with “the Canaanization of Israel”. He also discusses chronology, the role of the tribes in Israel, and the concept of “herem” found in Judges. I felt he excelled in his discussion of the structure of the book. In fact, he was more succinct than I have seen in larger works. He describes the double introduction and double conclusion found in the book. He also describes the cycles section and relates how the book differentiates between the major and minor judges. That section was full of insights. Next, he discussed bridging contexts by looking at interpretive issues. His analysis seemed well on the mark.

He does a fine job in his Introduction to Ruth as well. He explains that the author is unknown, and the date of composition can’t really be arrived at by some of the overly subjective ways that some scholars do. He has more to say about canonical status and position. He debunks some scholarly attempts to disprove the unity of Ruth. As we would expect, he well explains the concept of “hesed”. He gave one of the better, brief explanations that I’ve seen. He briefly discusses genre and purpose, as well as the structure of the book. Since it is central to the story he does discuss a few other background issues: the “goel”, the levirate marriage, and genealogy. For both books he provides an outline and a bibliography.

The commentary is ideal for what this series aims for. For each text, he discusses original meaning, how to bridge contexts, and contemporary significance. This is one of the more successful volumes in the NIVAC series. I plan to use it myself when I’m in Ruth and Judges, and warmly recommended to you!

One thought on “Judges & Ruth (NIVAC) by Younger”

Error: Twitter did not respond. Please wait a few minutes and refresh this page.