Well, who wouldn’t want to be? If you are like me, you wonder often if you are a good Dad. Jim Daly, president of Focus on the Family, is one I would want to hear talk on the subject. We need all the help we can get.

I’ll admit that I did not exactly expect what I read here. First, this wasn’t just straight principles. It wasn’t just a list of what you had better do either. It was Mr. Daly telling what he had learned from the three father figures in his life–his real father, his stepfather, and his foster father. They all bombed out and were gone from his life by the time he was twelve, with each one being progressively worse. Coupled with the death of his kind mother, these men inflicted great trauma in his life. It was the kind of trauma that speaks to what is at stake in being a father.

He quoted a few of the horrific statistics on “vanishing dads” and the far-reaching effects upon our society, but he clearly came from another direction overall. He explained how he felt when the Dads failed him. One on the football field when his Dad was the only one not there, later when his father was drunk at his baseball game, or when his stepdad left after his mother’s funeral, all the way to when his stepdad made a wild and false accusation, we felt the pain with him.

Why was this book helpful? He made us realize perfection was not ours to have. That viewpoint is more likely to make us throw up our hands and walk away. But we can figure out what is most important. We can focus there. We can learn to yell less, to stop overreacting and remember kids go through phases, and to make a big deal of only what is really big. We can decide which rules are important and let the others go.

This book succeeds because in a roundabout way it keeps grace and the gospel from being swallowed up in harsh law. Though it challenged me, it made me feel better instead of worse. That is a tall order for a book to Dads!

I received this book free from the publisher. I was not required to write a positive review. The opinions I have expressed are my own. I am disclosing this in accordance with the Federal Trade Commission’s 16 CFR, Part 255 . 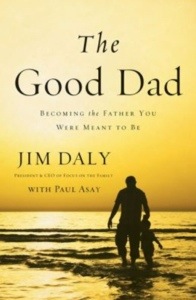 One thought on “The Good Dad by Jim Daly”