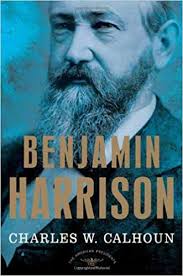 Besides the fact that Benjamin Harrison is the grandson of an earlier President Harrison and that he lived in Indiana, I knew so little about the man. It was a joy to get to know him in this work by Charles Calhoun. It’s a shorter biography of a lesser-known president who was a fine man but lived in good times when no major crisis was in play. Don’t expect a riveting read, but the president and his times are what they are and that is at least given here. For what it’s worth, this is my favorite biography of the few I have read in the American President’s Series edited by Arthur Schlesinger.

Like a few other presidents in this stretch of history, Harrison was a Christian, even a true believer you might say. Sometimes he came across as stiff or even austere, but it’s also fair to say he was molded by his Presbyterian upbringing and he faithfully followed it. He was sincere, loved his family, was a man of principle, possessed some ambition like every person to hold the office of president, was a great public speaker, and was real. His life story wouldn’t make a good movie, but it was a consistent story. It’s hard to say for sure because some biographers might conceal a president’s Christianity, but Benjamin Harrison may be one of the most distinctly Christian presidents we have had.

It’s bewildering that Grover Cleveland was returned to office rather than Benjamin Harrison receiving a second term. Nothing against Cleveland, but Harrison seemed like a good president who was generally liked. There were a few issues in that day that mean little to us now that people were highly divided over. Perhaps Harrison’s desire to deal with a few problems crossed a few too many people. He got some elements of his agenda through, though some were overturned later. I don’t think I would go too far out on the limb to say that Harrison took several positions that I could see Lincoln taking. The times were not as desperate and there will never be another Lincoln so I’m only referring to positions, not impact.

Though I appreciate Benjamin Harrison as a president and a person, this short biography of less than 200 pages is enough for me. It helped that Calhoun respected his subject. Some biographies go too far in making their subjects larger than life, but if the subject garnered the respect of the biographer overall it usually makes the book a little better for me (unless it is someone I want to dislike!).

Harrison’s life story was not that dramatic, though his wife died shortly before the election he lost for a second term. It’s hard to imagine how devastating that must have been to him as a man. He did later marry his wife’s niece, though there was nothing scandalous in it. It was sad to see his family divided as his children did not accept his new wife. Let’s just call that a footnote on a good life.

This whole stretch of presidents makes me wonder if a key ingredient to a “great” president is the environment of momentous times to shine in, especially if they don’t naturally have a larger-than-life personality. In its absence, only cut-throat politics remain and there’s little occasion to rise to greatness in that putrid habitat. There are a few presidents between Lincoln and Teddy Roosevelt that might have been a “great” president had they a crisis to carry the nation through to prove it. Somehow I think Benjamin Harrison might fall in that category.