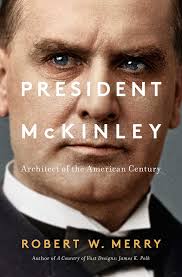 In the world of presidential biography, how would you grade the biography of one of our lesser – known presidents? Without doubt, it requires more of the author. The two main characteristics of such a presidential biography must revolve around: a) skilled writing that draws you into the life of one you never realized was interesting, and b) enough depth to make you feel that you really know this person. Granted, the life of the president that headlines the biography is what it is, and the author will be greatly aided if that individual happens to be compelling, even if the accumulating years pushes him into obscurity.

In this work by Robert W. Merry on Pres. McKinley, all these factors aligned beautifully to create an outstanding biography. It’s a joy to read and it moved me firmly into the category of counting McKinley as one of our better presidents. In fact, Merry is so successful here that I’m still scratching my head how that I, as one who enjoys presidential biographies, thought so little of McKinley before. The subtitle “Architect of the American Century” is in no way an overstatement. Probably the only reason that McKinley has suffered such obscurity is the unfortunate circumstance of being followed by the flamboyant Teddy Roosevelt. I found Roosevelt larger than life myself, and in reading his biographies found McKinley pushed exactly where Roosevelt wanted: in the shadows.

McKinley is easily one of the more upstanding men to hold the office. Merry is extremely fair, and worthy of praise even, in his presentation of the religion of McKinley. In other words, he reports the facts, and doesn’t pass judgment on those views, nor does he attack the sincerity of those views. McKinley was raised in a dedicated Christian family. He was a gentleman, he did not use swear words, yet was not overly judgmental of others. As a young person, he came forward at a camp meeting to profess salvation at a mourner’s bench, and in my view, stayed true to his roots in a much greater way than most presidents.

The author seems amazed, and I agree, that McKinley was extraordinary in managing and getting his way, yet without running over others. Though he took great pride in his military career in the Civil War, he was not horribly vain. He seemed to always rank getting the job done more than getting personal glory.

Whether it be with the gold – versus – silver issue, the Spanish-American War, a foreign policy that predicated itself upon America’s greatness without features of colonialism, the Panama Canal, and even economic policy, McKinley moved us from post – Civil War times to the 20th century. I’m glad Merry pushed Teddy Roosevelt enough to the side that we could see this great president.

As presidential biographies go, this one is a winner. I enjoyed it, and suspect you will to.