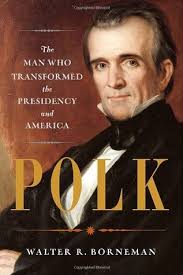 James Polk was perhaps the finest president in the field of mediocrity that the American presidency traveled through between Andy Jackson and Abe Lincoln. I don’t know if that insignificance had to do more with the men (most likely) or the commonplaceness of the times (less likely), or some combination of the two, but Polk, as Walter Borneman’s subtitle suggests, had an impact on both the presidency and the nation. Polk both expanded presidential power and the size of our nation itself.

This biography gives us enough of the pre-story of Polk’s life to really know the man by the time he assumed the presidency. He was ambitious (a common theme in every presidential biography), knew how to play politics, could be politically pragmatic as well as loyal where politically expedient, yet seemed to truly have a set of core principles. He was a protégé of Jackson, also a Tennessean, yet much more refined than his mentor. Their relationship seemed genuine. As is true of at least a few of our presidents, he had a wife who loved and supported him which he reciprocated with love and adoration. This biography fully fleshed out his personality that could be described as more introverted than some and detail oriented.

While the times played into his successes he seized the opportunities that came his way. He has the unusual distinction of accomplishing all his main campaign promises in one four-year term. Further, he kept his promise of only serving one term. Along the way, he was a successful war president of a war that was so victorious that the debate over fighting it is mostly now forgotten. The vast acreage that has been part of America since his day means it probably always will be remembered as something great for our nation. Though he was proslavery, it seems history has been kinder to him than several other presidents in that territory. He really did nothing to stem the tide that would ultimately embroil our nation in Civil War either. Strangely, he even lost all his last elections in Tennessee including two for governor and the one for president out of which he came victorious. I was surprised that the nation was not so perfectly divided by North and South this close to the Civil War, yet geography seemed to have little to do with which states he won.

Perhaps the saddest thing in his biography is how quickly he sickened and died after his presidency ended. He became sick on a victory tour through the states after his term expired and never really had the chance to enjoy his retirement in Tennessee.

As for the biography itself, Borneman was mostly satisfactory. As I read through presidential biographies, I’ve been making a special note of the role religion played in each president’s life. I feel this biography totally failed me in that regard since it’s known from other sources that Mrs. Polk and her Methodism had an impact on her husband. This shortcoming makes me wonder if I should have read the volume by Robert Merry instead (his biography of William McKinley was excellent). On the other hand, Borneman succeeded in making me feel like I both knew and understood James K. Polk. For that reason, I must recommend this biography.