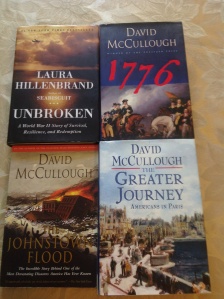 I wonder if any of you are like me: you read so much in a few areas that you fail to read in other great areas. I read so much on Bible study, theology, and ministry that I miss other helpful things. For the preacher particularly, it is this kind of broader reading that will imbibe realness throbbing with life into our preaching.

That is not to say we should just read anything of the millions of books printed. Pablum is all around us! But there are wonderfully enriching books too. Great literature, non-fiction writing including biography and history can all made distinct contributions to our lives.

I want to focus on non-fiction in this post. Here are four outstanding titles that will stick with you for a long time. You may notice that three of the four are by the same author—David McCullough. When you find an author that really connects with you, you should feel free to go to that well again and again.

As a prelude to this post I went to my Goodreads account and looked at several of my friend’s reviews there and noticed that many, and especially the preachers, had some of these kinds of titles listed.

I may add other reviews of this sort later and so I will kind of make this post the hub for reviews or discussion on non-fiction titles (though I plan a separate one for Presidential Biography).

I would love to hear recommendations from others since many of you may have read more than me in this category and I personally need to expand. Just send me a message or use the comments section of this blog.

What a story! A friend, Mike Montgomery, recommended this title to me. As he described the book, I noticed he could recall more facts than one could usually muster from a book previously read. I thought then that book must have been special to have gripped him so. I later read it and it was all of that and more.

It is the story of Louis Zamperini. A rough-and-tumble youth finally guided by a loving brother to run track, he rose all the way to the Olympics and even met a pre-WWII Hitler. Later called into service in the WWII Pacific Theater, he was shot down and spent a harrowing 47 days in shark-infested waters on a raft with little food. This part of the story alone would have made an awesome book, but then he was captured by the Japanese.

His suffering at the hands of the Bird, warden of the prisoner camp, are beyond description. Ms. Hillenbrand did a great job in telling the story, so much so that you continually wanted to get your hands on the Bird as you read. There are so many interesting things, so much determination, but you can read and find out yourself.

He got saved after the war and his quest to go and forgive his tormentors is a challenge to all Christians. Ms. Hillenbrand is not a Christian writer, but did little to obscure this telling fact. The recent film made of this book is fairly good in following the book, but stops short of what really explains his life. As is proverbially the case, the book was better than the film.

The first book written by the Pulitzer Prize author that is as gripping as any he wrote. Forgive the triteness of saying this was better than fiction, but it was. Drama, intensity, tension—this volume had it all. Since it was history, you knew as you read that the dam would break and agonized over the choices made by some. Then the description of the flood itself was as exceptional writing as I have ever seen. They call his writing style the “documentary method.” Whatever it is, it will stay in your memory a long time. A masterpiece!

In an interesting book idea, McCullough takes our history of one year (1776), but the one year that we teetered to the point that it could have easily gone either way. George Washington rises to the top as the man, who despite modern critics, is every bit the hero some of us think he is. Defeat and failure do not crush where they so easily could have. The Battle of Brooklyn, the escape that should not have worked, the Christmas surprise, all changed our formally disappointing prospects. More than a Washington biography, other generals, like Greene and Knox, prove their mettle. Here is a real page turner!

This volume has not garnered the praise that some of his others have, but that is only because the subject was not quite as thrilling. The writing itself is still of the highest standards. It seems to me that in his John Adams biography he became fascinated with the French influence of our earlier history. That influence is as dramatic as he came to believe and explains more about American history than most imagine. It connects the dots of the country we came to be. Perhaps it does not end on a dramatic high, but it is a pleasurable read.