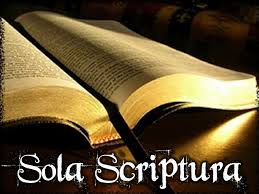 Sola Scriptura–By Scripture alone! That has a nice ring to it, doesn’t it? To that I give a hearty Amen! In Baptist churches that I have been around we have worded the same idea a little differently–The Bible is the final authority in all matters of faith and practice. To my ear that has a nice ring as well. Sign me up–It’s what I believe.

Early in this series I wrote on “We Preach The Word Of God! Really?” and went hard after something I feel passionate about: Biblical (Expository) Preaching. As I argued there, despite our claims, there is a dearth of it in the Independent Baptist world.

Strangely enough, I had an unusual experience preaching last Sunday. I preached on “He Added No More” from Deuteronomy 5:22. It was an exciting passage to study and preach. It was Moses recounting the giving of the 10 Commandments 38 years after the event happened in Exodus 20. The phrase is key because had it only meant “He was finished talking” it would not have even needed to be said. Whether it be the 10 Commandments, the Law of God, the plan of salvation, or the Bible itself, He gave all we need. It is complete and permanent. He gave it and “He added no more”.

A lovely couple was visiting from out-of-town and as they were leaving they were complimenting how much they enjoyed that Scripture. The lady told me that she had spent her life in Independent Baptist churches and it had been her experience that the sermons so often added more. So much, in fact, that she could not find what she heard in Scripture! The Lord may have added no more, but the preacher sure did in many experiences she had apparently had.

I need not rehash that refrain so common from my lips. Yes, we who preach God’s Word must hold the high standard of preaching God’s actual Word. Oops, there I go again!

But it does suggest another issue as well. Whether the preacher we are listening to actually sticks to the text or not, we are still responsible to the text. Sola Scriptura is not lived by proxy. The Bible is not only the final authority in matters of faith and practice for a congregation, but for me individually.

What does that mean? I can not turn over my understanding of God’s Word to someone else. If it works like it is supposed to, your pastor can be a great aid to digging out God’s Word. But if he fails, you are not off the hook. You are responsible.

It goes farther. You can not allow some man to make all the decisions for your life for you; not while you hold that wonderful Bible in your hand and have the Almighty God waiting to be sought by you so as to guide you.

There are some preachers who are a shame to the ministry, and others who are an embarrassment to those who love the Bible, but they do not absolve me from letting the Bible be my guide. This is the other side of the truth we must all remember.

5 thoughts on “Sola Scriptura–Is The Bible Our Only Guide? (IBTR #73)”