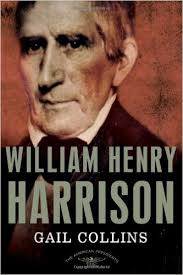 William Henry Harrison is the president who never had a chance to building a legacy as he died one month into office. We at best can guess what he might have done. Believe it or not, he is still part of only four families (Adams, Roosevelt, and Bush being the others) to have two occupants in the White House as his grandson Benjamin would later be president.

His real claim to fame was the Battle of Tippencanoe and the War of 1812. In fact, he was an older man whose career seemed over when the presidency came calling. He seemed a devoted family man and was father to many children.

Gail Collins outlined the bare facts of his life, and was a fine writer, but she was totally out of sympathy with him. As with most in his generation, he walked a tightrope on the issue of slavery and that was enough for Collins to completely write him off. Her boorish portrait was not substantiated by facts.

I have looked deeply to trace out the religion of each president on my journey to read a biography on each president. She never once mentioned his religion and I checked the index when I finished just in case I missed something–nothing!

Though this book is part of the reputable American Presidents Series, I wish I had chosen a different volume. While he may not have been one of our outstanding presidents, I feel he was far more a decent man than presented here.