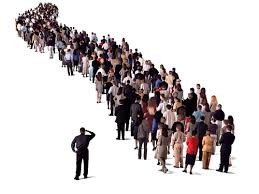 Are you a faithful follower of the Word of God or are you a supporter of the party line? In the first case, you’re a pursuer of Christ, and in the other you’re a partisan following the group. I suppose I’ve never met a Christian who didn’t believe he or she followed was the former rather than the latter. But the far-ranging views out there today proves more are a hanger-on of a particular religious group than they would like to admit.

Though my background is in the Baptist world, I’ve seen this plague many denominations and groups. To make the problem even worse, many groups splinter into several smaller groups with their own unique set of beliefs. While we might find the presence of sin in our world as the cause of this problem, we should still pull ourselves away from it and go ever back to the Bible.

This problem begins innocently enough. At some point, we try to draw our beliefs from the Bible. Because the Lord has designed that we live in the local church setting as a group, we will also at some point decide what we believe together. So far, so good. But something changes after a time. We fall into the lazy habit of just believing what the group does. We reason that since they sought the Bible in the beginning they can always be trusted to follow the Bible now. Then, another problem arises. New issues arise that we hadn’t thought of, or at least hadn’t thought of how to make an application of the Scriptures to it, and so we specify exactly what we mean to keep our original set of beliefs.

Again, the whole process is one of well-intentioned purposes, and yet we get off track. Our current set of beliefs have been revised several times since our original digging into God’s Word. We now are 2 to 3 steps away from the Bible while thinking we are still firmly in its boundaries.

I’m quite the inferior carpenter, but have been around the process enough to know one mistake we shouldn’t make. If we are going to need several boards of the exact same dimension, we should carefully measure out the first one and cut from it. When I was a boy, I can recall my Daddy taking a pencil and making a mark on the carefully measured board to distinguish it from the others. I can remember from way back then that he told me not to pick up the boards cut from the original to cut other boards. Though it technically should have been the same dimension, he told me it’s easy to get off more and more by that process. I believe this is what we have done in our Christianity.

As you may have noticed, groups tend to get defined by their unique differences rather than what they have in common. That perspective incurs great cost for Christianity. If the error was not bad enough, the Christian divisiveness is catastrophic. Because of our warped egos and general depravity, we fight for those differences, at times, even more than we do for the great trues that we hold in common, such as, the death, the burial, and Resurrection of Jesus Christ.

As is often the case, we judge each other by the wrong board. We become quite bombastic, cry separation, and criticize our brothers or sisters in Christ relentlessly. In many cases, we are convinced that we are standing for the Word of God. Our motives likely began as a desire to faithfully follow the Bible, but now the results are far below the motives.

We would all do well to stop and ask ourselves when was the last time we checked the Bible for our deeply held beliefs. To be sure, we must carefully check those Bibles as our casual reading just regurgitates without thought was someone else decided we believe the long time ago. If you haven’t carefully verified the beliefs you loudly proclaim, then put yourself down in the category of one who spouts the party line. When you spout that party line, you are saying that where the belief came from doesn’t matter as long as the party says it is correct. Why does what scares us in politics not even phase us in our own Christianity?

If we allow ourselves to follow the party line, we are only sycophants carrying someone else’s opinions. Even worse, if we attack and criticize where they tell us to, we are their henchmen. I don’t know about you, but I don’t want to be a mere follower of the party line when I have the opportunity to be a devoted follower of Jesus Christ.

5 thoughts on “Following the Party Line”