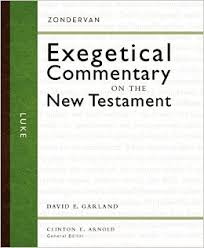 With every new title in this Zondervan Exegetical Commentary on the New Testament series that I delve into, I find my appreciation growing. This series is well conceived and this entry by seasoned-commentator David Garland adds to the laurels of the series. In addition to commentaries on a few New Testament epistles, Mr. Garland has already produced a volume on Mark in the NIVAC series. He is equally at ease in either the Gospels or the epistles.

In his Introduction to Luke, Mr. Garland discusses the authorship of Luke and Acts. In accepting Luke as the author, he strives to dig a little deeper into who Luke actually is. He keeps his discussion of Luke’s sources mercifully brief and jumps on into the genre of Luke and Acts. He sees Luke as both an historian and apologist. The next section is called “date, provenance, and the readers of Luke-Acts”. Unlike some other commentaries I’ve read, he discusses those three issues together rather than separately. There’s even in that section some great information that some others might put in the category of structure. He makes some nice, valid points about Luke’s purpose in writing this gospel. The only disappointment in the Introduction is that his section on structure is only an outline.

I found the commentary proper of even more value. That’s not to say I didn’t disagree with him on some points. For example, the meaning of the word “inn” in the birth of Christ is much more conducive to the traditional meaning that Mr. Garland seems to believe. Most other commentators would not agree with him on that one either. Still, the commentary is of extraordinary value. Every passage I surveyed offered the kind of things I’m looking for in a commentary.

Mr. Garland appears comfortable with the ZECNT format. In each passage, he discussed the literary context, stated the main idea, offered his own translation, explain the structure and literary form, and gave an exegetical outline before launching into a detailed explanation of the text. That is followed by a theology in application section that helps preachers bridge the gap between exegetical information and the sermon.

Having reviewed the volumes on Mark and John, and now reviewing this volume on Luke, I’m amazed at the quality this series has given us on these three Gospels. This volume is ideal for pastors. Think of it as being helpful like the NAC series with a little more depth. I warmly recommend it.

One thought on “Luke (ZECNT) by David Garland”