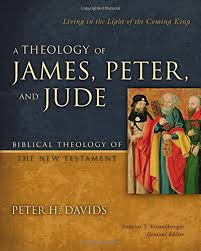 Here’s another volume in the impressive Biblical Theology of the New Testament (BTNT) series by Zondervan that will include eight volumes when complete. This volume addresses between its covers James, Peter, and Jude. As you can imagine, this book covers the least addressed elements of theology in the New Testament. Peter Davids, the author, has spent his career in this portion of Scripture including two major exegetical commentaries on James and First Peter. He is the perfect author to tackle this subject.

Chapter 1 serves as an introduction that traces out common themes and issues among these New Testament epistles. He argues that the Greco-Roman background and educated writing style are true for each of these letters. Further, he sees a monotheistic outlook with a strong Christology. To his mind, all four letters put a strong emphasis on the the source of sin (desire or lust).

The other four chapters address each of these four letters individually. Issues commonly found in the introduction of an exegetical commentary are studied in each case, but its emphasis on theology is brought out in the latter part of every chapter. Mr. Davids wrote as one who greatly admired these four letters. He did agree with a few conclusions that I could not, particularly in the area of sources, but he has written a scholarly, predominantly conservative work.

Each chapter also gives an outline followed by a literary – theological reading of the book. I felt he covered well where commentary and theology meet. His tracing of the important theological themes in each of the letters was spot on in my opinion. As an added bonus, the book is attractive, well written, and contains a few charts where appropriate. Coming in at 300 pages, the author manages to neither dodge any important issue, nor become so prolix that he wearies the reader.

In my judgment, this book holds up well with the other fine volumes already released in this series. If you are beginning a study of James, Peter, or Jude, put this book in the must-buy category.

One thought on “A Theology of James, Peter, and Jude by Davids”