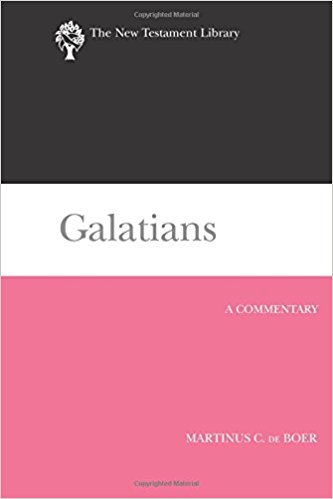 Martinus C. de Boer has written a captivating commentary on Galatians that is one of the very best in the New Testament Library (NTL) series. There’s a lot I appreciated in this volume. Often, I look to this series to find the critical position of the scholarly world, and though the author falls in that camp, he surprised me on several occasions. To his mind, the Book of Galatians is all about the Gospel. You’ve got to love that!

His Introduction is brief, but that’s only because he prefers to deal with most issues as you come to them in the text. After providing a lengthy bibliography, he began his Introduction by discussing his own approach that he will be taking in the book. At first, I didn’t know what to think when he said, “the aim of this commentary, then, is to understand and to expound Paul’s theology as it unfolds in this letter, and as the Galatians will probably understand it when they receive it”. As it turns out, the commentary doesn’t prove to be as novel as that sounds.

As is more typical in introductory materials, he explains the addressees of the Book of Galatians, which is the churches of that area. Though that section is brief, we learn that he holds to the North Galatia View. Next, he discusses the date of the book. He looks at the six references to events or time in the letter itself and formulates a conservative conclusion about the date (51 A.D.). He has a nice section on structure. He overviews the most common breakdown before he works his way to his own outline that breaks down the book into six sections. He provides an overview of the book using that outline. Strangely enough, he never mentions in the Introduction what he explicitly proclaims in the commentary itself – the primary theme of Galatians is “the gospel of Christ”.

The value of this book is really in the commentary section. He has the gift of clarity and where necessary breaks down his arguments into numbered lists. It’s easy to follow his line of thought whether you agree with it or not. He draws good parallels and connects lots of dots. Even if I can agree with whatever conclusion he makes, he understands how commentary ought to be put together. There are several fine short excursuses throughout. This one is worth checking out!

One thought on “Galatians (NTL) by De Bour”