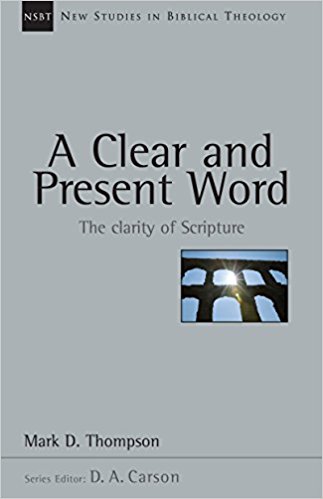 This entry in the New Studies in Biblical Theology (NSBT) series by Mark D. Thompson dives into an oft-overlooked aspect of biblical theology – the clarity of Scripture. Since this clarity, which is often called the perspicuity of Scripture, faces such widespread negligence, or even disdain, Mr. Thompson tells us why we can confidently assume clarity and use the Bible in our lives.

The first chapter is a detailed look at how rogue scholarship has victimized the concept of biblical clarity. Their attempt to render the acceptance of clarity as absurd is turned by the author as he takes their arguments and objections one by one.

The second chapter sees God as the communicator. Though some claim human words by definition obscure the clarity of what God reveals, we see that the opposite is true. The clarity of Scripture springs from the character of God. In other words, because the Almighty God has chosen to communicate, what he chooses to communicate must be clear.

The third chapter wrestles with the fact that Scripture sometimes explains that it is hard to understand. For example, such a statement is made about parables in the Gospels. This book shows us how those two ideas do not have to be mutually exclusive. We can, in fact, have a Bible that presents both the clarity that God intended while upholding his inscrutability.

Chapter 4 is on what the author calls “engaging the hermeneutical challenge”. He explains how hermeneutics have taken a life of their own, and in the scholarly world at least has created more doubt than belief in the Word. It is true that the Bible that the author argues possesses clarity also has a wide variety of conclusions by its readers. His discussion of this fact is quite helpful.

The final chapter is Mr. Thompson’s attempt to tie everything he has stated together to both restate the clarity of Scripture and give it an understandable definition. The title of the book is the hint you need to forecast what he concludes.

This book succeeds in fulfilling the aims of this series. It finds the sweet spot and expounds with scholarly, logical, and conservative aplomb. It’s a winner!