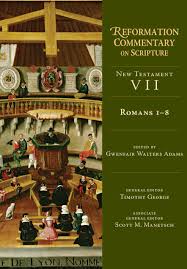 Before I even cracked open this book, I figured it might be the most important in the Reformation Commentary on Scripture (RCS) simply because it covers Romans 1-8. I further imagined that its editor would likely find what to leave out more difficult than what to put in with such a wealth of Reformation writings on these chapters available. When I finally perused this volume, I found that editor Gwenfair Walters Adams had done as well as job as could be done though arbitrary choices had to be made.

I enjoyed Adam’s introduction to the commentary on Romans 1-8. She fully described the challenges you would anticipate with this volume and yet gave a wonderful overview in around 25 large pages. She explained which groups wrote widely on Romans and which did not and yet was equitable to all. I felt she was exceptionally fair to the Anabaptists and accurately stated their position. Without doubt, this volume favors a Calvinistic viewpoint, but what else would you expect from a Reformation commentary?

If you are familiar with this series, you will be pleased to know that this latest release is wonderfully consistent in following the series format and making interesting selections from Reformation writings. General editor Timothy George has succeeded in having this series make a congruous presentation.

Picky readers can always argue selections made for each passage, yet it would be impossible to debate the distinct contribution this volume makes. There is nowhere else you could gain all these Reformation insights between two covers. And as we said before, these chapters were the favorite of the Reformers. There simply had to be great pressure in covering Romans 1-8 in the RCS series and that pressure has brought us a pearl.