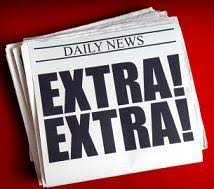 My wife has written a wonderful blog post on the subject of the election as well. I encourage you to read it. I Will Heal

Error: Twitter did not respond. Please wait a few minutes and refresh this page.