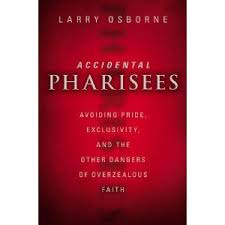 I thought that would get your attention. But in truth, you might not be able to handle this volume called “Accidental Pharisees” by Larry Osborne and published by Zondervan. I say this not because it isn’t good, but because it is so good! It tackles many preconceived notions with, of all things, what the Bible actually said. Novel approach? Well, you might not like it when you realize you have believed something yourself that the Bible doesn’t say.

I’ve reviewed several books at this point, yet I barely know what to say. There is so much challenge here, so much to consider, so much to answer for. By the way, don’t assume that you know what he is going to say since he speaks of Pharisees. It’s not just an attack on legalism as you expect, but an expose of the Pharisee that lurks somewhere down inside us all.

I loved every chapter, except when I hated it because it seemed to me that he pegged me exactly. You may seem filleted, but then again, it will be refreshing as you can’t help but believe that it is exactly what Christ would want you to think. I can only hit a few highlights though deep insights fly off of every page.

He describes Pharisaism as an overzealous faith. It’s a faith with a good beginning, as were the Pharisee’s dedication, that somewhere goes awry. He shows the depths of our dark hearts in our desire to make Christianity more exclusive, or with the bar raised ever higher, to lift ourselves up. He calls it “thinning the herd”, and shows how that becomes bigger to us than the mission Christ actually gave us. Putting litmus tests to distinguish the inferior Christians from me is part of it too. This is all part and parcel of being a Pharisee and Jesus fought it at every turn. If He didn’t like it then, He doesn’t like it in me.

He shows how extra rules are used to distinguish Christians even farther. Not clear Bible commands, but extra rules to make us even better is what he speaks of. Something could make us better than what God said? It all really is absurd. The worst of it is that it throws mercy along the wayside–you know, that mercy that so defines our God!

I love how He discusses what Jesus actually said. He attacks head on our stated interpretations that can actually run contrary to what was actually said. This is, to my mind, the most challenging part of the book. Do we derive our beliefs from  Scriptures themselves, or spotty interpretation from the past? If our goal is to follow God’s Word, this should in no way make us afraid. Watch him look freshly at the Early Church in Acts.

Then he explains how we’ve high jacked the Biblical admonition of unity and replaced with the much inferior uniformity. Uniformity kills unity. It’s this idea that unity must be based on thinking exactly like me. That doesn’t exactly sound like unity, does it? Then he shames us for taking this uniformity to the extreme of picking our own favorite teacher or demonination as the standard. That leaves no place for the Lord and His Word, does it? Ouch.

Finally he talks about gift projection. That’s where I make my gift the essential one and judge every Christian on that one criteria. He’s right–that’s wrong and it makes no sense to do it.

The book isn’t perfect. You will not agree with every detail. You likely will be mad here and there. At times when he tells us to be easier on struggling Christians, he could almost sound like great dedication isn’t important. I’m sure that is not what he meant, but he waxes eloquent at times. Still, he provokes thought, real thought down avenues you might never have thought of before. What more could a book give us?

I received this book free from the publisher. I was not required to write a positive review. The opinions I have expressed are my own. I am disclosing this in accordance with the Federal Trade Commission’s 16 CFR, Part 255 .

6 thoughts on “You Had Better Not Read This Book!”