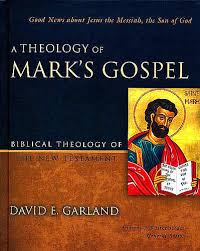 This book is the equivalent of a whole shelf of books on the Gospel of Mark. Veteran commentator, David Garland, has written an ideal volume here. Think of it as a book that summarizes all the issues and themes that scholars often talk about involving Mark’s Gospel to put beside your commentaries on Mark. Fortunately, Zondervan is putting out a whole series called the Biblical Theology of the New Testament (BTNT) in eight volumes to cover the New Testament. Authors in the series are required to have already written a commentary on one of the books in their section. Mr. Garland has already written a commentary on Mark in the NIVAC series. Though its stated audience is for upper college and seminary-level students, I found it, as a pastor, accessible and easier to read than many volumes of its kind.

Do you know why I find chapters 3 through 14 so valuable? It’s because all the issues that I’ve encountered in commentary reading on Mark’s Gospel get discussed in a clear, suggestive summary of what’s been believed and straightforward reasoning behind conclusions Mr. Garland offers. Some of these subjects were ones I’ve tried to get smaller individual volumes on, but was thrilled to find them all here.

He discusses what the introduction of Mark 1:1-13 means. He covers the Christological titles of Jesus, such as the Son of Man. Other standout chapters were his explaining the Kingdom of God in the Gospel of Mark. He made great sense of the secrecy motifs that you so often hear of in regards to Mark’s Gospel. Another subject that you hear about so often is the prominence of discipleship and he covered it in great depth. Don’t miss chapter 10 on the requirements, costs, and rewards of discipleship – that chapter is quite perceptive. He makes clear what the atonement means in Mark’s Gospel, and as you might expect, covers Mark’s eschatology. The last chapter is on the debate over the end of Mark’s gospel, and though I find the longer ending more accurate, he well covers the issues.

As I said before, I can’t believe how many volumes I’ve looked for that could be replaced by this one volume. For my money, it’s quite a bargain.