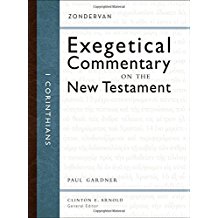 This latest release in the Zondervan Exegetical Commentary on the New Testament (ZECNT) series on I Corinthians by Paul Gardner grows my appreciation for this series. It is at once warm and pastoral as well as showing excellent scholarship. This volume is a candidate for the first choice among pastors!

The Introduction is briefer than many I’ve seen in this series. What we have is well done, but it lacks a section on, for example, structure. Every passage in the commentary proper addresses structure, but there’s not an overview of it like has been an emphasis in others of this series. His conclusions are conservative: he sees Paul as the author without reservation, he follows the traditional outlook of Paul’s ministry and dates the letter at AD 54. He digs into the church divisions present in the epistle since that has been widely debated in scholarly circles. He dismantles some of the attacks on the integrity of the letter because so many of the theories floated are hopelessly subjective. He presents a balanced take on the city of Corinth and explains the social and religious context. After discussing the rhetorical and literary context, which he probably sees as covering structure, he returns to defining the divisions mentioned in the letter as the key to its interpretation.

His commentary is where my appreciation blossomed for this commentary. He used the typical format of this series and in my opinion excelled in the “explanation of the text” section. That’s probably the section most used by commentary uses too!  As you know, there are several highly-debated passages in this epistle and he was at his best in each of them. Not only did I often agree with what he said, but also did I find his thoroughness, logic, and argumentation done with more care than many others. In fact, I reviewed another good, conservative, major commentary on this letter recently, and was surprised to see how completely Mr. Gardner surpassed that work.

In many places, he added special “in-depth” sections in shaded boxes that were superb. He wasn’t afraid to take some conservative viewpoints that are less in vogue these days. I loved it!

I Corinthians is blessed to have several excellent commentaries on its contents. This one is as good or better than any of them: I give it the highest recommendation.

2 thoughts on “I Corinthians (ZECNT) by Gardner”