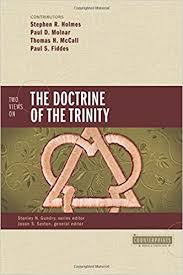 Here’s a volume in the Zondervan’s popular Counterpoints series. Because a proponent of each view presented debates others of varying viewpoints, these volumes can be particularly effective. A single author often has trouble fairly presenting opposing views, but here every chapter is presented by someone who strongly believes in the position described. Knowing that others will debate every point keeps each contributor on his or her toes.

This book describes two views on the doctrine of the Trinity: classical Trinity and relational Trinity. Each of those viewpoints is divided yet again by two contributors who hold slightly different perspectives within the model. The only thing that strikes me as odd about this volume as compared to others of its type that I have seen is that the four contributors, Stephen R. Holmes, Paul D. Molnar, Thomas H. McCall, and Paul S. Fiddes, are not that far apart in what they believe. If you have not been deeply immersed in Trinitarian debate, the differences in these four contributors may almost seem like splitting hairs. Fortunately, there’s a lot to learn by working through their interactions.

The style is the same as the others in the series. First, a contributor presents his perspective, the other three contributors offer responses, and the original contributor gives a final rejoinder. It’s a quite fair method as every contributor gets to give the last word on his own perspective. The general editor, Jason S. Sexton, also gives a 10-page conclusion reflecting on what was presented. For the most part, this is just a nice summary. Additionally, there’s a glossary which can be quite helpful as this subject has a lot of specialized vocabulary.

Usually when I peruse one of these volumes I find myself gravitating most closely to one of the presenters, but in this case, I agreed with great portions of all four of them. That’s not to say that they don’t disagree on a few points, but they are an essential agreement about the importance and main facts of the Trinity.

Though it’s a little different than what I expected, I still found it to be an overall nice resource well worth consulting if you are tackling the doctrine of the Trinity.

One thought on “Two Views on the Doctrine of the Trinity: Counterpoints”