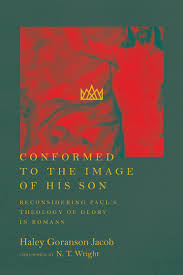 I’m convinced we will be hearing about this book that probes what being “conformed to the image of His Son” means for many years to come. It’s clearly a scholarly work, but anyone who has an interest in theology will see that it projects itself as paradigm shifting. Whether you agree with all the conclusions found in this volume or not, you will almost without fail find yourself thinking some thoughts you’ve never thought before. Right off the bat, you will notice in the forward by N. T. Wright that even major scholars will wrestle with it and some may be convinced.

In the introduction, we are introduced to the author’s premise. The six common viewpoints on Romans 8:29b are set forth along with an explanation of why the author finds them wanting. There’s also a brief outline and an overview of what you will find in each section of the book.

Part one of the book redefines the meaning of “glory” as found in Romans 5-8. There’s a look at Jewish literature, further probing of usage in Romans, and an explanation of what participation in Christ’s glory means. For me, I was fairly well convinced of the conclusions found in these first chapters.

Part two digs deeper into the text of Romans 8:29. There are three chapters that look at what the image of the Son means, what participation in the firstborn Son’s glory entails, and why we are purposed for conformity to Jesus Christ. I was less convinced of the conclusions found here, though I’m not sure I fully made up my mind. In any event, there’s plenty here to think about.

The criticism that I might offer for this volume was that the author made it sound like every scholar had failed by carelessness in their dealings with this passage and phrase. Further, some of the previously offered explanations that can be found in print are not quite as threadbare as Jacob would have us believe. Maybe we can overlook these negatives by seeing them more as passion than censure.

I’ll recommend this book for its importance. If you love theology, you’ll want to see this book and decide for yourself.