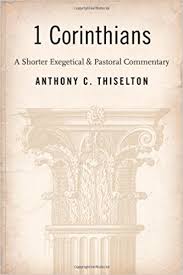 Anthony Thiselton has a revered name in the scholarly world. Among his many works, he is, perhaps, best known for his well-received NIGTC on 1 Corinthians. At first glance, you would assume this newer work on 1 Corinthians, described as “a shorter exegetical and pastoral commentary”, would merely be an abbreviation of the earlier, massive commentary. It’s not. In the preface, he carefully describes what this book is. He wrote it after five additional years of reflection and has written the work here with less scholarly interaction and more straightforward delineation of his own thoughts with additional pastoral and practical help. Neither work precludes the value of the other and this would be one of the rare cases where you really need two works by the same author on the same book of the Bible.

If you, like me, have used his earlier commentary and remember it’s thorough introduction, you will be impressed that he could also write something as accessible, clear, and helpful as he did in this 27-page introduction. Many writers could do one or the other, but few could pull off both with such success. The first section of the introduction covers the city and the culture of Corinth, which succinctly reviews what would be found in any introduction. The second section on the ethos that permeated the church was particularly enlightening. From there, he got into rhetoric and archaeological information and finished with a discussion of the writing of the epistle itself. A few helpful pictures were thrown in as well.

The commentary proper was to the point yet distilled the heart of the matter nicely. In the preface, he described how difficult the section on suggestions for possible reflection for every passage was to put together. While, perhaps, not as valuable as the commentary itself, these reflections are worth scanning for the pastor preparing messages. The tone is not that of heavy scholarly interaction, but it’s clear great scholarship stands behind what’s presented.

This book isn’t part of a series and might be easily overlooked. Look it up. You won’t be disappointed.