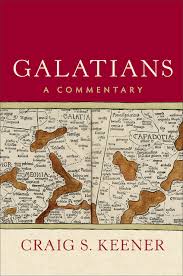 Craig Keener turns out massive scholarly books at a rate unmatched by anyone I can think of. More impressive, they tend to be quite highly rated. Though I haven’t personally used it, his recent multivolume commentary on Acts is already legendary for its scope. To be honest, I wondered if this commentary on Galatians would be dry or overly padded. It wasn’t. I was pleasantly surprised at the engaging quality of the writing. Though there are some paragraphs that pastors can afford to overlook and copious footnotes, bibliography, and indices, I felt the commentary itself was the perfect length for a true in-depth exegetical commentary. He has a knack for surveying scholarly opinion and providing clarity in telling you what he concludes that is truly helpful whether you agree with him or not.

The Introduction for Galatians that followed his translation and outline for the book could fairly be labeled to-the-point. He began by sharing insights on how Galatians has been interpreted historically including a nod to Luther. From there, he addressed whether Galatians is an apocalyptic letter. He tackled author, provenance, and date with a skillful thoroughness. Without a doubt, you will have all the information you need to conclude on Galatian’s date after you read here. He defined Paul’s audience and laid out the well-known North Galatia versus South Galatia hypotheses that scholars have been debating for years before landing on the North Galatian side himself. Next, he gets into another debatable area, this time that of Paul’s opponents in Galatians. He gives, perhaps, his most detailed attention to this subject in his introduction. I found it really enlightening as that was not a debate I had deeply considered before. Finally, he looked at structure, rhetoric, polemic, before he gave a short summary of the effectiveness of Paul’s letter.

The commentary proper runs from page 47 to 588. I’m, again, impressed at his balance between thoroughness and effectiveness. No doubt, he will address some topics that only scholars will find interesting, but I fail to see how anyone couldn’t get help in understanding what each passage is addressing. You could be like me, and not agree with his conclusions as much as you might with some other commentators, but it is his laying out the issues, explanations of word meanings, and stellar historic and scholarly background that makes this book such an asset. Though it’s not in one of the major series, I suspect it will be as influential as if it were. If you are a scholar, I imagine his footnotes and bibliography will be a gold mine for you. Perhaps the book could have used a few pages of conclusion for the letter as a whole after the commentary, but I certainly can’t think of anything else that you will find lacking here. Like the best of commentaries, he will share his conclusions, but his real help is giving you the information to draw your own. That always wins for me.