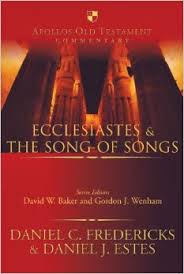 This volume is the joint production of Daniel C. Fredericks on Ecclesiastes and Daniel J. Estes on the Song of Solomon in the excellent Apollos commentary series. The task of the commentator is a challenging one on these two books of the Bible and this book holds up well among the competition of other major commentaries.

Fredericks writes in a different vein than most because he sees “vanity” (“hebel”) as “transience.” I must admit that affects every conclusion he makes. Some who hold that “hebel” means “emptiness” criticize this volume. I still hold to the idea of vanity personally, but see a wide meaning that includes both emptiness and transience. For that reason, the commentary was enlightening to me. I would recommend owning another commentary  to explain the emptiness angle, but you will enjoy Fredericks.

He is conservative on other introductory matters and writes well. I rank it highly.

Estes sees the Song as almost every modern commentator does–as holding a natural meaning rather than a spiritual or typological meaning. To me, that comes out a little strange on a few passages particularly and makes its very inclusion in the Bible hard to explain, but again, that is true in every modern commentary.

Still, among those modern commentaries this volume is in the upper echelon out there. Like the Ecclesiastes portion, it is conservative and well written. It is also not as graphic as some.

I highly recommend this volume for a modern, exegetical commentary that gives you a two-for-one deal on these two fascinating books of the Bible.

One thought on “Ecclesiastes & The Song of Songs (Apollos OT Commentary)”