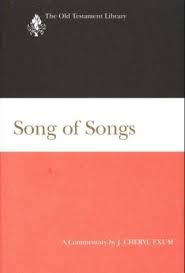 This volume covers the Song of Songs in the Old Testament Library (OTL) series. It’s best known for its literary criticism and I can see why as that’s clearly the emphasis throughout the book. As is common with this series, it takes a critical position throughout, but as is also common for commentaries on this book of the Old Testament, there are some strange theories suggested. It succeeds in what it attempts to do, yet I’m not sure it makes the same theological contribution as some others in the series. It’s not the place to look for application either. Though I did not at all agree with the overall arguments made in this commentary, there were some fascinating paragraphs.

The introduction is longer than most in the OTL series. After a substantial bibliography, the introduction begins by describing the Song as a love poem “about erotic love and sexual desire”. You will notice quickly how key the author finds this to be in the Song. I’ve seen a few popular commentaries that almost make it a book about marital intimacy, but this is the first major commentary that I’ve seen that goes as far as this one does. The most shocking part is the author takes what seems to be the strongest literal interpretation and then says there could be some allegorical meaning to it. The difference is it’s not an allegory of God and His people, but just of love. It’s surprising the way the author digs into this subject of love, relationship, and eroticism over many pages of the introduction. Along the way, gender studies are brought in. I really can’t agree with any of these conclusions, but this is the place I would suggest you go if you want to look into it.

There’s a look at poetic composition and style, including a discussion of whether it’s one poem or many, and a thorough review of literary arrangement and its significance. There’s a fine listing of how other commentators have divided up the book. From there more literary concerns are considered including the literary context of the ANE world. Copious examples are brought to bear. There’s a section on the historical-cultural context as well as a consideration of how this book made it to the Bible. The author concludes allegorization came about to explain its blunt material. There’s a good review of the historical interpretations that the Song has gone through.

The commentary itself is detailed and continues to be dominated by the things brought up in the introduction. Along the way, you will get a good representation of a critical outlook of the book. It’s not my favorite commentary in the OTL series, but it’s one of the most important critical commentaries available.