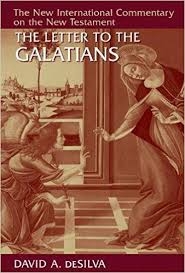 David DeSilva has wonderfully replaced the volume on Galatians by Ronald Fung in the long-lived, much loved New International Commentary on the New Testament (NICOT) series. This new volume is little like its predecessor.  That volume was old enough to be written in a more expositional way than is found in the major scholarly works the series turns out today. DeSilva is fully in line with what the series has been turning out in recent years. Without a doubt, he brings many of his own specialties and a somewhat more lively writing style as well. He always has a few detractors for his strong emphasis, and to some minds overemphasis, on rhetoric, but I predict this commentary will be well received. It’s pretty conservative too.

There’s a major, thorough Introduction of over 100 pages after a substantial bibliography. First, he addresses the Pauline authorship. From there, he delves into Paul’s ministry in Galatia and the pastoral challenges he faced there. That requires a careful rendering of the false teachers there. It was an explosive battle among Paul and the false teachers and DeSilva well described it. Next, geographic issues (he favors the South Galatian view) and chronology are surveyed. Acts is consulted and a conservative chronology is pieced together over several pages.

As you would expect with this author, he dives deep into rhetorical issues. There are 40 pages on it! I don’t find that as interesting as some do but he examines it with the best scholarly standards. He ends with structure and the overall effectiveness of the letter.

Next, you get 400 pages of commentary on the epistle itself. I found it thorough, done with careful exegesis, and with a healthy coverage of issues scholars love along with some timely excursuses. Pastors will benefit from this commentary too. All in all, a fine work.