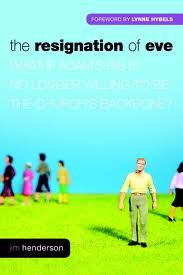 The Resignation of Eve by Jim Henderson  is presented as tackling the “sad resignation…developing among dedicated Christian women who feel overworked and undervalued in the church.” I thought it might be the perfect counterpart to another book I recently read: Why Men Hate Going To Church. I felt the victim of bait and switch as I read this book.The real goal of this book is to promote women in the ministry. I must confess up front that women in the ministry is not a position that I find scripturally sound. He contends that many women are leaving church over this issue. Of course some women have left church if they could not have a key leadership/pastoral role in the church, but are we to believe that this is even in the top 5 reasons for women leaving church? What, then, is the reason men are leaving the church? Because leadership is open to them? He paints a dark picture of many more women leaving if they are not allowed to take any role they like.He makes his case with case studies of individual stories of women he interviewed. Each chapter is well written and you leave the chapter feeling you really know something about the woman be describes. Still, to prove a point, he uses only anecdotal evidence. Despite trying to say he used a good variety of women to present his case, the majority of Christian ladies I know could not be described by any example he used.

The few conservative women he wrote about were not the best examples he could have used (I mean these ladies no disrespect). Even with them I felt thay were presented as naive, just not sophisticated enough to see the obvious truth that  everything the Bible says about women not being pastors was culturally charged and without present bearing. Many thoughtful Bible students would disagree and to just state it as fact is weak.

As the book went along, you got the feeling that he was promoting the idea that we must structure church to give people what they want to get them to stay. There was never a discussion of what the Bible actually said about how church should be done.

He did mention a few inconsistencies among some churches that refuse women the office of a pastor.  But that alone couldn’t carry his premise.

The book should be advertised to the target audience of denominations that say they believe women are allowed to pastor but the numbers are out of kilter. Then the book could use arguments, as it did, that are used in the workplace. All in all, I cannot recommend this book.

I received this book free from the publisher. I was not required to write a positive review. The opinions I have expressed are my own.