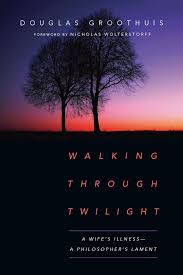 This book grabs you. You pick it up, anticipate what you will find, and then get surprised. Though being real, or “raw” as they say, is all the rage these days, after you read this book you may decide, as I did, that you’ve hardly ever read something that’s “raw”. So much of the rawness of our day is merely façades more painstakingly crafted, but here the author detonates dynamite under his façades. He is a philosopher, an academic, an accomplished speaker, the man that is supposed to have it all figured out, but in the waves of bewilderment that crashed upon his soul as his wife descended into the twilight of dementia he found out he did not. What he could figure out when he forced himself to examine this bizarre, unexpected place is worth contemplating. It reminded me of my dark places, which were not as dark as his, and taught me what to examine the next time.

This effort is not along the same lines as the other titles Mr. Groothuis has produced, other than his quality writing skills. For example, I was greatly instructed by his “Philosophy in Seven Sentences”. He was able to marshal philosophy and especially the Bible for his struggles. He did it without an ounce of superficiality. He wasn’t able to tie everything up in neat little packages either. The profound part was that the more crushed he became the more sufficient his Savior became. I was moved.

Usually, when I review a book I overview the contents, but I think that would be a mistake in this case. Just experience it. Approach every chapter with a clean slate. You won’t regret it!

One thought on “Walking Through Twilight by Douglas Groothuis”