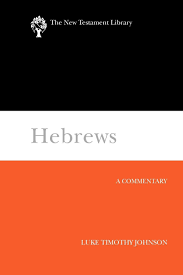 Prolific New Testament commentator Luke Timothy Johnson tackles Hebrews in this volume in the New Testament Library (NTL) series. He’s written in other major series such as the Anchor Bible commentary series, and from what I can tell, this has been one of the more popular titles in the NTL series. In my view, it’s one of the more rigorously done scholarly work in the series.

After a substantial bibliography, the author jumps into what turns out to be a longer, more in-depth introduction than found in several other volumes in the series. After some opening observations, the author explains Hebrews in the Christian tradition as he delves into the historical background. Next, he tackles literary concerns including language and form. There’s a cultural and social overview that considers Roman as well as elements of Judaism and Christianity in the text. From there, we read of what the author calls the circumstances of composition. He delves into the rhetorical situation and finally addresses the issue of date. As you would imagine, the conclusions are of a more critical nature as is usual in the NTL series. There’s a survey of the always-controversial subject of authorship for the book of Hebrews. Finally, we have some good probing of the theology of the book. The author’s conclusion that we have here the mature teaching of Christ was well done. Much of the conclusions in this section would match that found in more conservative commentary series. The same would hold true for the theological discussion of discipleship.

The commentary proper includes some rigorous exegetical work. If you are familiar with either the author or the series, you will know what to expect. As a bonus, you will find 7 top-notch excurses. Again, it is helpful and effective. I can’t think of a better commentary on Hebrews from the critical camp.