Sometimes there are volumes that are really good that don’t become as immortal as some others. That doesn’t mean that they aren’t of real value. Here are volumes of varying fame that are all of value to one who handles the Word of God. All easy to find on used book sites, you might find some books here to bless you.

1. Famine In The Land by Steven Lawson

The subtitle says “A Passionate Call For Expository Preaching” and accurately describes a book whose message is so critically needed. Mr. Lawson makes a powerful case for a problem where many of us share his passion. Were this message to take hold, it could revolutionize Christianity today. The famine is real and the effects of the starvation are all around us. He gives insight to what happened to expository preaching. Entertainment and performance have run it out the church doors. Marketing techniques hold sway now. He opines how that the preaching of the cross that was once foolishness to the world now is to the church? This volume will fire you up and put you on the right track!

He discusses “the criminal mishandling of God’s Word.” He not only espouses expository preaching, but comes hard at the gravity of getting off track. He hates spinning the text and reminds us to remember our audience of One. I particularly enjoyed his timely chapter on eisegesis. He defines it as “the reading of the text…of a meaning that is not supported by the grammar, syntax, lexical meanings, and over-all context, of the original.” Have you ever heard a sermon like that? Have you preached one? He covers several other such subjects. Mr. White can be overly harsh at times, and has written some other books that I have not cared for, but this one is a dandy.

This volume tackles the thought of a pastor being a shepherd. Focusing on our being shepherd, mentor, and equipper, he writes well. It is a worthy point of contemplation as the shepherd metaphor, he reminds, is in Scripture over 500 times. Though I wouldn’t agree with his theory of church polity, I love his title. While it might make you smile, you might learn along the way that to be a good shepherd you will end up smelling like a sheep too!

4. A Portrait of Paul by Rob Ventura and Jeremy Walker

Taking Paul’s ministry these two pastors identify “a true minister of Christ.” They don’t hide the suffering involved or the hardships endured, but they well describe the goal and strength of it too. This is an excellent read!

5. How To Preach To People’s Needs by Edgar Jackson

In this interesting approach, Mr. Jackson talks about using the sermon as group therapy. We all deal with many things. A congregation will often cover all the bases in problems. There are sorrows and joys in life and we who preach the Word must take the Word and guide people through. This helpful volume gives guidance in preaching to things like the guilt-laden, the sorrowful, the fearful, the insecure, the lonely, the defeated, and many others. This book is well worth reading.

6. The Preacher and His Preaching by W.B. Riley

An older volume by a well-respected Baptist pastor that gives basic counsel on sermons.

7. The Elements of Preaching by Warren and David Wiersbe

A quick, easy read on basic principles of preaching. A real shot in the arm to keep us where we should be. The chapters are short, pointed, but wonderful. How about: “never be satisfied with your preaching”. There are practical points like not “hopping rapidly from verse to verse in the Bible.” He tells the danger of “abusing the use of humor in the pulpit.” Or even worse: “preaching ourselves instead of Christ.” There’s much more!

8. Preaching in the Holy Spirit by Albert Martin

A little volume that addresses the oft-forgotten, yet essential element in preaching–the power of the Holy Spirit! We so need this reminder.

9. Mourning a Beloved Shepherd by Charles Hodge and John Hall

In this unusual volume that is two memorial sermons for James Alexander, we find real encouragement. It is good to think about what you would like said about you at the end of your ministry. It takes a certain kind of ministry to have it said with sincerity. Hodge began his sermon with Acts 9:20–“He preached Christ.” He then said, “Nothing higher than this can be said of any man. Angels stand uncovered round the humblest tomb on which these words are inscribed.” I can think of nothing I would rather have said, can you?

You can find all posts and books reviewed in this series here. 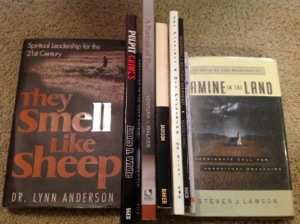 One thought on “Books On The Ministry #8”