A great Christian worth knowing, Samuel Rutherford, lived a life of devotion to Christ. Many Christians, sadly, know little of him. Personally, I knew of his famous letters and have even read some of them devotionally, but I knew little of the man. So this volume by Richard M. Hannula and published by EP did me a service by filling in my lack.

He had the heart of a pastor and the skill of a scholar. His gentle fellowship with Christ, frankly, challenged me. His grace under fire refined that devotion rather than curtailing it. He was tried and exiled from his beloved congregation. From that lonely place he wrote his letters.

The Crown in England was always a thorn for Rutherford and his fellow Presbyterians in Scotland. If that weren’t enough, his first wife and eight of his nine children died. He had some serious illnesses himself. He seemed only to draw closely to Christ in all these tragedies.

He found Independents and Baptists to be a major problem as he helped formulate the church policies of England in later life. This only serves to show that you can strongly disagree with someone on a few points and yet be moved by their love for your Savior.

Thanks Mr. Hannula for this quick, informative, and pleasant read. For what it strives to be, it could hardly be better. This is my first of the “Bitesize Biographies” series, but they are helpful. We could likely pass these on to our children to read after we have finished them. 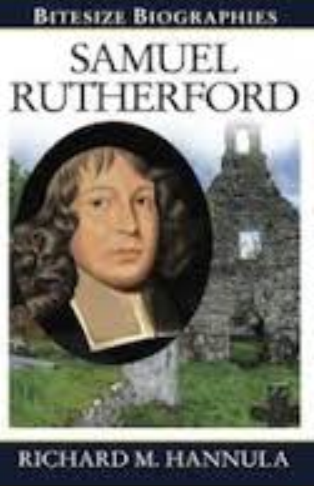