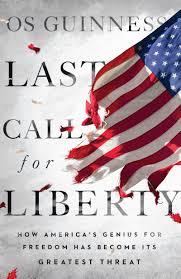 I’m not sure how Os Guinness pulled off writing the book of the hour while at the same time giving us one for many generations to come, but in Last Call for Liberty he has done that very thing. He says so much to our generation, yet it will be the words that will be needed in a hundred years. At least if there’s any liberty left to cultivate and protect at that point. What is equally amazing is how he did it. There’s only a little of Trump or Obama, and even less of Republican or Democrat. He would have us stop drowning in the latest election cycle, or even the latest 24-hr news cycle. Our problems are more fundamental than the latest round of lunacy. His perspective spans the horizon. He looks at where we are, how we got here (since the 1960s at least), and where we are going. He holds us accountable to what freedom is and what it is not. He calls on us to embrace anew the precious gift of freedom or our twisting of freedom will be our destruction.

Guinness paints his portrait with the colors of the American Revolution of 1776 and the French Revolution of 1789. That comparison explains so much. I’ve always loved reading about that time period, so I’m a little ashamed I never saw this dichotomy before. How freedom was both approached and defined is why one of those revolutions has held for 200 plus years while the other is a historical footnote. Still, he isn’t giving us a historical survey. No, the problem is that much of America today has switched from 1776 to 1789 in their guiding of our nation. Peril awaits.

That’s not to say that this book is depressing. It’s like a teacher who believes in your intellect and boldly makes a case that assumes your ability to comprehend. He never talks down but sounds like he speaks to peers who will see what he’s saying when they face the logic. He comes across as positive there’s hope and all that’s missing is for us to slow down and carefully analyze the facts.

You will, without doubt, get some of the most perceptive analysis of the trends and events that define us today. He never comes across as shouting “this is wrong” as much as “here’s what’s behind certain behaviors and why they will hurt us all”. He never yells at us for assaulting freedom. It’s more of a proclamation that freedom is one of the greatest things that God has given us and it’s worth hanging on to.

I’m not going to give a chapter-by-chapter overview in this review. Just jump in and you will see things that perhaps you’ve never thought before and that now you see as the natural, unanswerable explanation of our turbulent nation. This book, if ingested by our nation, would revolutionize us all, or at least take us back to the beautiful place we began. Labeling a book as a “must-read” is trite, but read it and see if that isn’t exactly what you’d say.

2 thoughts on “Last Call for Liberty by Os Guinness”