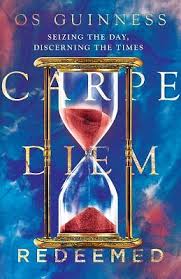 When Os Guinness has something to say, I’m ready to listen. All of his recent releases (Last Call for Liberty, Impossible People, and Fool’s Talk) have said something so needed for our day – don’t think trendy but timeless. This latest release, Carpe Diem Redeemed, which takes an old phrase meaning “seize the day” and does a play on a book from the philosophic world entitled Carpe Diem Regained takes that same sort of piercing look into our world today and pulls out how a Christian ought to think anyway. Fortunately, this book about “seizing the day” has nothing to do with the typical motivational tripe that floods the market in our day and yet says nothing. In fact, you won’t figure out the profound thing he is saying until he is finished saying it.

In presenting his thesis, Guinness must delve into and explain time from many angles. Even when you expect him to explain the obvious, he will express something that has stopped being obvious in our lives. In this first chapter alone, his introduction to time will pull in the concept of human freedom. Read it: it makes sense. His next chapter on the survival of the fastest explains time in our culture and the pressure it presents. Chapter 3 on the hidden tyranny of time is a treat. His explanation of the power of labeling should be proclaimed throughout the land. I’ve never read a better explanation of progressivism either. While he writes a book that strikes a chord with a conservative like me, he is not after a political system but a biblical view. That means he will step on any toes necessary to explain the truth.

Over the last few chapters, he will move to explaining how to “seize the day”. After he tells us the importance of understanding our times, you will be tempted to predict his final conclusion. And then you will be wrong. He will shock you and then you will agree with him and be encouraged in doing so. We don’t usually worry about spoilers for a book of this type, but I’m not going to spoil the surprise for you. Just read the book for yourself! You will be glad that you did.