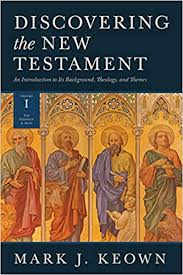 I love this book! I’ve had the privilege to use and review many books on New Testament Introduction, but this volume has one of the best combinations of design, layout, information, and approach that I’ve encountered. Though it only covers the Gospels and Acts until volumes 2 and 3 are published, it may easily become the first grab off the shelves when questions of New Testament Introduction arise for me.

This volume is my second foray into the writings of Mark Keown. His two-volume work on Philippians in the EEC series was, in my opinion, a very successful exegetical commentary. This work is of a completely different sort. He exhibits the gifts of a teacher though out, so it’s no surprise to me to learn that he has taught this material for many years.  This book is ideal for students, but I also notated page numbers at the beginning of places I want to review later for further study. There’s much to be said for writing that can communicate clearly as found in this book.

There’s nothing missing that I would want in New Testament Introduction (through Acts) in Keown’s approach. Both the Jewish and Greco-Roman contexts were exquisitely presented. For those who care, there’s a clear overview of critical methodologies. Though it seems a fool’s errand to me, there’s a chapter on the speculative Synoptic theories. Keown excels in the five chapters that cover each of the four Gospels and Acts in turn. You will leave each chapter with a better understanding of the purpose of each book. Next, he mines the paramount theme of the Kingdom in a chapter that captures the heart of these writings. The final two chapters look at miracles and parables in a way that answers criticisms and sees through them to their purpose.

You may quibble over some point (he speaks of “Q” as fact), but overall this book can stand up to any conservative Introduction. On the teaching level, this work could easily serve this generation as Merrill Tenney did for past ones. In fact, it’s far better than that oft-used textbook for my money. You will do yourself a favor to look this one up.