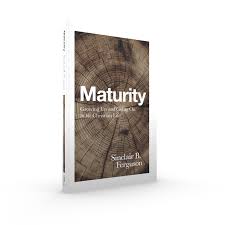 Over the past few years, I’ve made it a point to read new works by Sinclair Ferguson that come along. I’ve been blessed immensely and have greatly expanded my doctrinal understanding of many points. I don’t always agree with him, but he can’t be dismissed carelessly as he thinks deeply before pen ever touches paper. As it turns out, this work on maturity or growing up and going on in the Christian life is a revised volume of the work he wrote in his earlier days. It’s not as overtly doctrinal as other works of his that I’ve read, but the doctrinal underpinnings are obvious throughout. As the title suggests, it has a devotional flavor and is really geared to propel us forward in our Christian lives.

The book is simply set up. There are five subjects of growing up, standing firm, facing difficulties, pressing on, and maturity that gets anywhere from 1 to 4 chapters each. Some sections were more valuable to me than others, but that probably has more to do with needs in my life rather than a wavering quality of writing.

His first chapter throws down the gauntlet for why maturity is so critically important to Christians. A few paragraphs in and Ferguson refuses to allow us to think that there’s some magic formula to rush the process of maturity. As he says, it takes time and patient progress. There are several hindrances, which he outlines carefully, but the Bible also presents a process that will lead to maturity – a process that we should cooperate with. Later, he’ll talk about the key of abiding in Christ and what he calls full assurance. He tackles what guidance is as well.

In the next section, just as you would expect if you’re familiar with Ferguson’s writings, he outlines the problem of sin. From there he’s going to talk about handling temptation and fighting the enemy. In one of the best sections of the book, he talks about coping with suffering. In the section called “pressing on”, he explained serving faithfully and running patiently. He concludes with one chapter on maturity itself.

The book is well written. He marshals much Scripture, disperses much doctrine, and gives practical, balanced help. There’s none of the cheesiness of so many current titles on the market today. If you want realistic help, a help that understands that sanctification is a lifelong affair as is the maturity that springs from it, then this is the book for you.