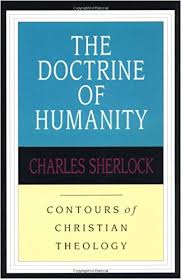 At this point, I’ve been blessed to use several volumes in this too-little-known Contours of Christian Theology series. This one on the doctrine of humanity by Charles Sherlock compares to the best volumes in the series. It dives into the doctrine yet not in such an esoteric way that you are left with little contribution to your thinking. Mr. Sherlock hits on most of the main components in the study of Christian anthropology. He even relates beautifully to the corresponding doctrine of sin in helpful ways. He occasionally relates a viewpoint that you might find subversive (he is not in my opinion as conservative, for example, as Sinclair Ferguson on the Holy Spirit in this series), but his contribution to the big picture of understanding this doctrine is greatly enriched by the arguments and detail he brings to bear.

His first focus, as he calls the divisions of the book, is our being made in the image of God. He looks at that in terms of ancient Israel, our being renewed in Christ, and in a variety of contexts in Christian thought. This section is truly foundational and well done. The next focuses on the human race. He takes a broad view, he reveals his political stance along the way, yet he still offers wonderful food for thought. The final section is on the human person. There’s a chapter on the unique person that covers things like human dignity, freedom, indignity, rights and the sanctity of life and an introduction to thinking about gender roles. He had a chapter each for being a woman and being a man that ran back and forth between fascinating and making you raise an eyebrow. His chapter on the whole person where he got into the body, soul, spirit, and heart was the best in the whole book. After the conclusion, he has two appendices that relate the doctrine of sin to humanity as well as some additional material on gender roles and issues.

Though you may have picked up on my few caveats, the book is still totally engrossing on many levels. Again, it’s one of my favorites in the series and is a must-have in your doctrine of humanity section.