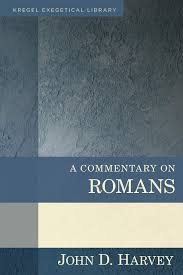 I’ll be honest. When I first thumbed through this book, I wasn’t impressed at all. It looked too brief for an exegetical commentary. Then I started digging into it and I became more and more impressed. First, we need not forget that some commentaries are written for pastors or serious Bible students rather than scholars. That is the case here. Come to think of it, there isn’t exactly a shortage of those voluminous exegetical works on Romans! Second, there’s much to be said for writing succinctly with clarity. That is clearly present in this work. At times he says as many meaningful things in a paragraph that some of those larger commentaries would need 10 pages to say.

The Introduction was actually enjoyable to read. He made historical background actually interesting to read. When he delved into deeper, more scholarly issues, he gave a number of particularly helpful charts to synthesize his presentation. I give him kudos for all of them.

The commentary was a solid work. There were a few instances where Romans has become controversial that he did not say as much as many other writers. He usually outlined the various viewpoints, but didn’t seem to want to bog down in making that what his work was known for. He never lost his focus on pastors and Bible students. In some ways, the commentary reminded me of one of the better NAC volumes. In any event, this is a commentary worth having.